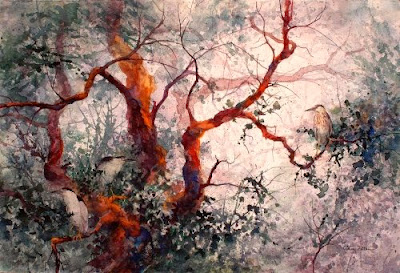 Herons at Dusk, 19" x 30"
Fascinated with drawing and nature studies since childhood, Floy Zittin continues to be excited about depicting the natural world, and she enjoys the challenge of combining a faithful representation of her subjects with the unpredictability of the watercolor medium. She is well-known in the San Francisco Bay Area for her paintings of birds, trees, and local hiking trails. Because birds are often somewhat hidden in the landscape, she strives to convey that reality in her paintings. Splashes of color and interesting lines attract our attention and then we discover a heron or a woodpecker hiding "in plain sight." Her hope is that her paintings will bring attention to local wildlife and increase appreciation for our remaining open spaces. 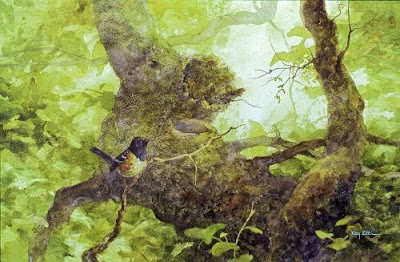 Floy majored in biology in college and became interested in watercolor paintings during a summer in Japan. She began working as a biological illustrator on a project for her Master's thesis and then spent ten years creating illustrations for field guides for the National Museum of Natural Sciences of Canada. While living in Canada, she spent some time in an isolated fishing village where she taught herself to paint by working on watercolor portraits of fish for the fishery biologists. After returning to California, she became active in the art community of the Bay Area. Her paintings have won numerous awards in national shows and have been accepted twice into the prestigious "Birds in Art" exhibition at the Leigh Yawkey Woodson Art Museum in Wausau, Wisconsin. She is a very popular instructor, teaching several ongoing classes in watercolor, as well as occasional workshops. 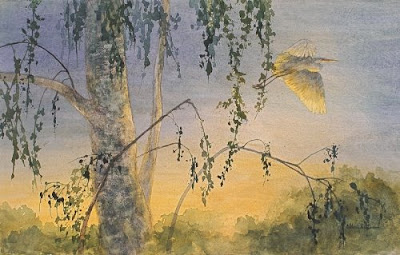 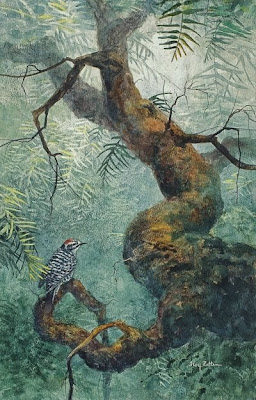 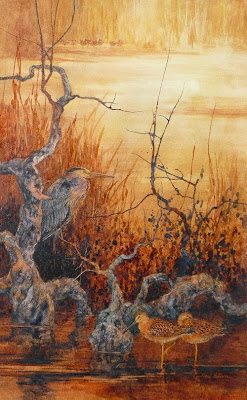 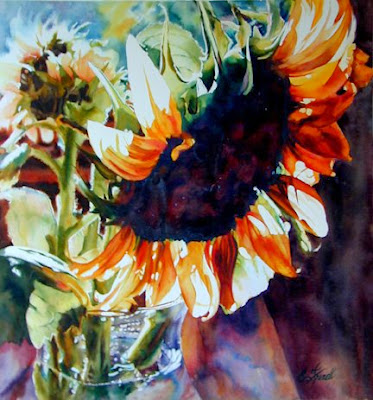 Nature was a basic element of her Colorado childhood, so it comes as no surprise that Elaine Frenett is compelled to paint by the earth's beauty. In 1987 she made a committed decision to pursue previously-abandoned artistic yearnings, and after earning a degree in Graphic Design/Illustration, her illustrations were published from San Francisco to New York. Between assignments, she began to paint the nature images she loved. She received such a strong response from her audience -- as well as personal satisfaction -- that she turned her focus to fine art. Her work is representational yet stylized, with exaggerated values and colors, sensitive details, and juicy washes. 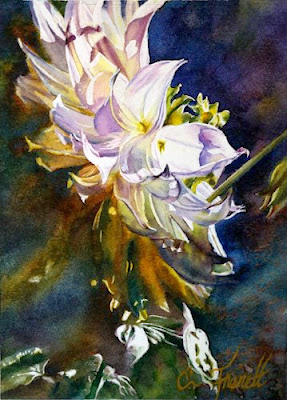 Elaine's watercolors have been juried into numerous shows, including the Biennial Watercolor Exhibition at the Triton Museum of Art in Santa Clara, California, the California Watercolor Association Annual National Exhibit, Watercolor West, and Watercolor USA in Springfield, Missouri, and she has won numerous awards. Her work is in the permanent collection of the Triton Museum, as well as in private and corporate collections internationally. Since moving to Oregon in 2005, she has shown in several galleries and been juried into the Watercolor Society of Oregon, and her career has expanded to include teaching classes in journaling -- combining writing with sketching in watercolor. She will lead her first international retreat to Manzanillo, Mexico in April 2009. 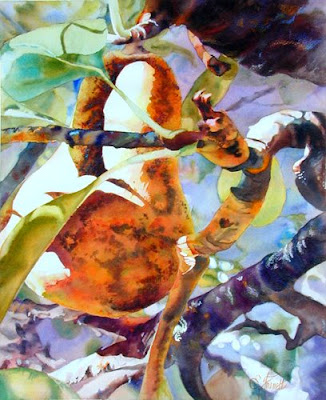 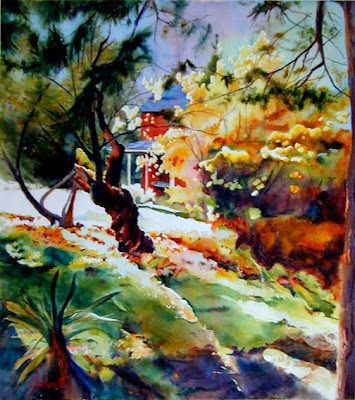 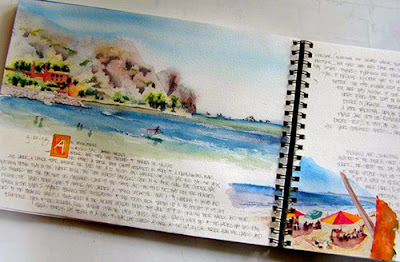 Go to Elaine's blog to see more of her work and learn more about her upcoming workshop.
Posted by Chris Beck at 6:54 PM 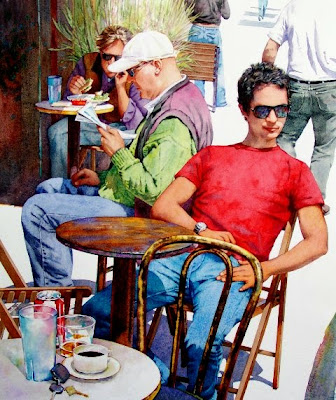 Denim Nation, 24" x 20"
Watching pigment and water dance together on the page fascinates Claire Verbiest and compels her to return to the process time and again. Her subject matter is varied. It is her pursuit of the effects of light on form and color that is the unifying element in her work. The figure -- an early love of hers -- has become her focus again, with the goal of incorporating it in familiar settings where people are engaged in mundane tasks or activities. "Denim Nation" (a scene from a sidewalk cafe in the Mission district of San Francisco) is an example of her 'new' direction. 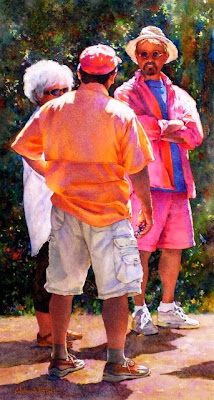 Summer, 24" x 12"
Claire has been painting in watercolor for some time, and her work has received many awards and accolades along the way. Her paintings have been published in numerous books on watercolor technique, including several of the Splash books, a series featuring the best in watercolor which is published by North Light Books. In addition to painting full time, she gives workshops in the U.S. and overseas. She regularly serves as a juror and gives demonstrations for local art organizations, and she is a signature member of several art societies. Currently she has work in a show at the Triton Museum in Santa Clara, California, where she has exhibited numerous times in the past. 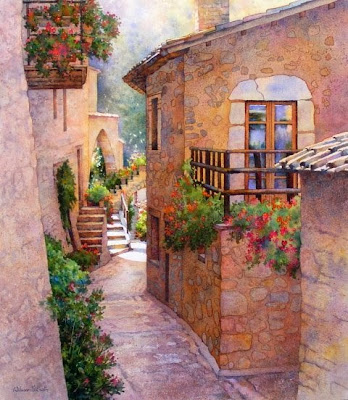 Water, Melon, Glass, 22" x 17"
Go to Claire's website for more information and to see more of her work (both watercolor and soft pastel).
Posted by Chris Beck at 6:19 PM 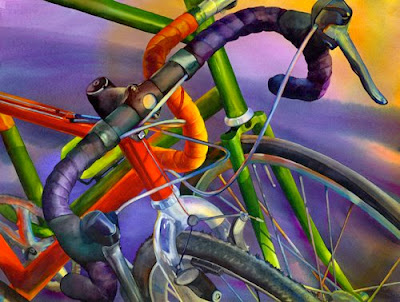 Parked in Palo Alto, 22" x 30"
Terri Hill has an extensive background in communications and graphic design, both of which influence her work in watercolor. She is well-known in the San Francisco Bay Area as "the bike artist," but she has a wide range of subjects that are strongly influenced by the healthy lifestyle of Northern California. Terri runs, bikes, and swims -- and enjoys local foods and wines as well -- and she finds the good life a wonderful inspiration for her work. Her paintings are known for their rich, saturated color and unusual vantage points. 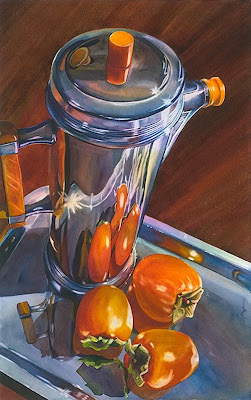 Terri has won many awards for her work in the past three years. She was accepted into the biennial watercolor exhibition at the Triton Museum of Art in Santa Clara, CA in 2006 and 2008. She has won First (2006) and Second Place (2008) in the Los Gatos Art Association Open Juried Shows, a First Place (2008) in their juried member show, a Second Place (2008) and a People's Choice Award (2007) in the annual Santa Clara Valley Watercolor Society shows, and an Award of Excellence (2007) in the AVA Artfest at the Triton Museum.

In addition, her work was the feature story in the Palo Alto Weekly Weekend Edition for Sept. 5, 2008 and was an Editor’s Pick in The Wave Magazine, Dec. 1-14, 2008. Terri will also be featured in an upcoming episode of “Cycling Scenes of the Bay Area” -- a cable TV show dedicated to the San Francisco Peninsula bike scene. 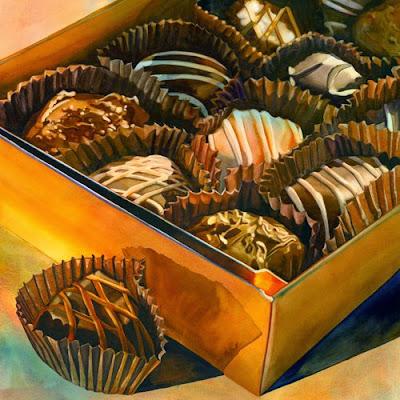 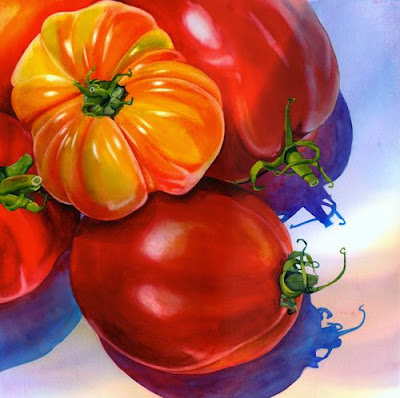 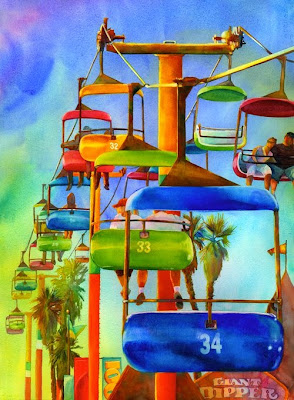 Chris Beck
I'm a watercolorist who loves color and pattern, and I like to mix strong design with amazing details for that special "wow" factor!! I'm a Signature Member of the National Watercolor Society, the Transparent Watercolor Society of America and Watercolor West.